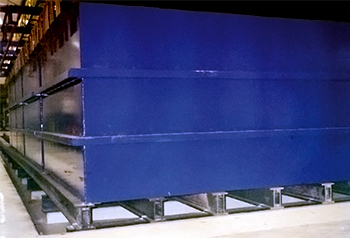 Strongwell’s 8” EXTREN DWB® has come to the rescue for the employees of Lincoln Plating in Lincoln, Nebraska!

During an expansion several years ago, a new containment pit for a plating line was installed at the plant. However, the elevation of the line was too low and employees were forced to bend over to take finished parts off the line.

When Lincoln Plating discovered the problem, they worked with their local Strongwell distributor, Seelye Plastics, and Strongwell’s engineering team to develop a FRP solution to the back-breaking problem.

The 8” EXTREN DWB® was determined as the best material to use to raise the height of the containment pit for several reasons. First, the vinyl ester double web beam would be able to withstand the corrosive attack if the containment pit ever failed on the line. Second, by installing the beams in a grid pattern, the plating line would be raised by 16”—the height needed to save employees’ backs. The design team also knew that with its ability to take a live load of 825 PSF over a 13’ span, the EXTREN DWB® was more than strong enough to support the plating line.

The plating line is now running well at its new height and Lincoln Plating employees - and their backs - are very grateful!