Case Study: A Composite Safety Deck for a Baptistry 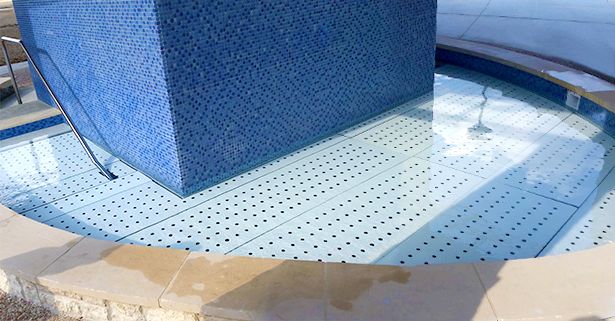 Since the early days of the Christian Church, the Baptistry has been an important architectural and ceremonial part of most church buildings. In denominations which practice baptism by immersion, a baptismal pool is generally used. Modern baptistries are outfitted with pumps, heaters, drains, timers, seats, plumbing, handrail, windows, and steps - a true architectural water feature.

In 2015, the Second Baptist Church in Katy, Texas, wished to outfit their baptistry pool with a removable safety deck. Initial designs utilizing steel presented rust and weight challenges. An alternative application suggested wood which created water absorption and rotting concerns. The Second Baptist Church contacted a local fabricator, which was able to design and fabricate a custom safety deck utilizing Strongwell’s COMPOSOLITE® building panels and EXTREN® structural shapes. Custom fabricated parts were assembled on-site to protect and house the supporting equipment underneath the structure, which spanned as wide as 18' in some areas.

In addition to the need for corrosion resistance, the safety deck had to be easily submersible, yet lightweight enough to be handled without the need for special equipment. The simple (yet very effective) solution was to rout several holes in the deck for ease of water flow.

Both the installer and Second Baptist were very pleased with this unique application of pultruded fiberglass composites.