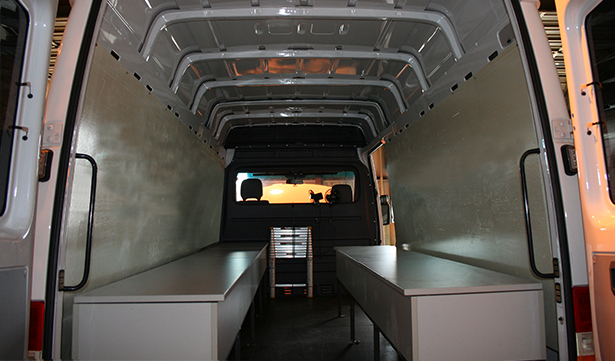 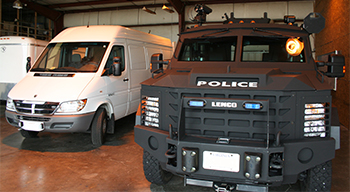 The Bristol, Virginia Police Department (BVPD) SWAT Team is part of a joint regional task force which may be called on at any time to respond to highly volatile situations and clandestine operations. Officers use various protective gear and are highly trained in ways to protect themselves, but in extreme cases, an additional measure of protection may mean the difference between life and death. One simple action this SWAT Team took was to outfit the interior of its unmarked transport vehicle with Strongwell’s 1/2" HS Armor panels.

The BVPD’s unmarked Dodge Sprinter cargo-style van has one purpose: transport up to twelve SWAT Officers, one Medical Officer, and all their gear to a response site safely and oftentimes, covertly. While the department owns a highly-armored BearCat SWAT vehicle, it is not suited for undercover operations. One major concern of using a cargo style vehicle for personnel transport is its weight limit of 3,500 total lbs.

Additionally, since the vehicle is designed for light to medium use, its walls are made from traditional automotive steel panels not designed for ballistic resistance. In the course of a single day and using only basic carpenter’s tools, the police department retrofitted the 1/2" HS Armor panels along the side walls of the van’s interior. This installation added UL Level III and NIJ Level III-A protection to its passengers, while adding less than 800 lbs. of weight to the chassis. In addition to the automotive steel and occupants’ body armor, installing Strongwell’s HS Armor panels provided another barrier of lightweight protection for SWAT officers without sacrificing the look or function of this important tactical vehicle.