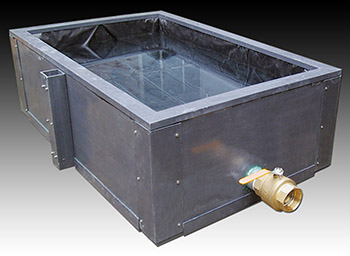 The EPA’s Spill Prevention Control Countermeasure (SPCC) mandate states that utilities must take steps to prevent “reasonable potential” of an oil spill reaching navigable water. AEP responded to the mandate by searching for a new ecological, economical, and sensible solution that would help the utility comply with the SPCC mandate most efficiently.

Previously, AEP had used poured-in-place concrete containment systems around its oil-filled substation equipment. The concrete was labor intensive, expensive and extremely difficult to install in remote or mountainous locations and could not be installed in freezing weather. AEP also used earth berm dikes, but they blocked access to equipment and made maintenance difficult.

Strongwell’s collaboration with AEP resulted in the development of the lightweight COMPOSOLITE® secondary containment system, which is corrosion and UV resistant, strong, low in thermal and electrical conductivity, cost effective and easy to install. As shown by burn tests conducted by a local fire department and witnessed by AEP personnel, the system also withstands exposure to direct flame without leaking any contents.

Installation of the COMPOSOLITE® secondary containment system requires approximately half the man hours of a concrete system and no special equipment is needed, resulting in significant time and cost savings. The system is delivered in a kit form to job sites and includes drill bits, adhesive, adhesive applicator and fasteners—everything needed for assembly.

Ken Posey, an AEP engineer, stated the partnership between AEP and Strongwell on this project produced a “win-win situation for both.” The system has attracted other utility customers and it could possibly become a standard in the utility industry.