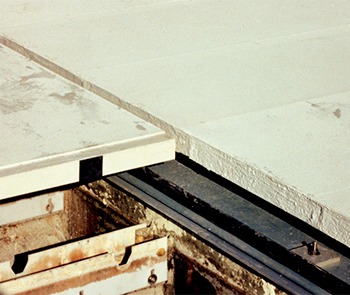 The Quesnel River Pulp Plant in Quesnel, British Columbia, was under an odor control mandate from the Canadian government to replace two 70' x 120' rectangular wooden covers on anaerobic digesters at the plant site. The badly corroded wooden covers didn’t last one year because of severe corrosion from hydrogen sulfide and other gases collected by the digester system.

Installation requirements for the job were demanding because removal of the old covers and new installation had to be done in six days. Anaerobic digester operations could not be shut down totally, but only one digester at a time.

“For 24 hours a day for six days in sub-freezing temperatures, crews removed the old covers and bolted prefabricated 4' x 7' 8" DURASHIELD® sections to EXTREN® 10" fiberglass channel,” reported Van Aert. “The fiberglass installation was the easiest part of the job and was completed in less than a day for each digester. Of 500 prefabricated panels, only about 20 had to be trimmed.”

Strongwell cut, sealed ends, applied a grit surface to the top of the panels, painted them and epoxied panels together to form 4' x 7' 8" sections and shipped sections “ready to bolt in place” to Quesnel. The total-covered area was 17,000 square feet over two adjoining anaerobic reactor tanks.

“Ease of installation, corrosion resistance and insulation were the main reasons for choosing these panels. The gases are very corrosive. They ate through 1/4" stainless steel bolts in six months,” said Van Aert, “and good insulation was required for odor control.”

Another advantage of the DURASHIELD® covers is that they are sturdy enough to be walked on overall by workers (designated walkways are not necessary). Van Aert stated the job not only came in under budget, but was also completed within the time frame allowed, exceeding expectations.