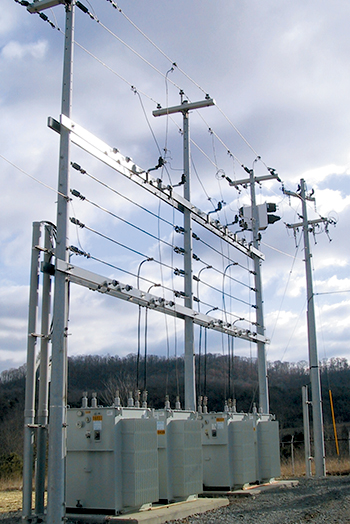 The Johnson City Power Board in Johnson City, Tennessee, found a new application for fiberglass products at one of its substations.

The municipal power provider is using 34' long EXTREN® rectangular tubing at a substation that generates electricity for the Johnson City Water Works' Watauga River Plant. The tubing replaces wooden cross-arms that supported electric wires that feed power to a group of transformers at the substation.

According to Mike Stovall, system design engineer for the Johnson City Power Board, the department began searching for alternatives after having to replace the wooden cross-arms that were supposed to last for 30 years after only ten years of use.

"We were looking for something that would last and wouldn't have to be replaced anytime soon," he said.

Fiberglass tubing was chosen over steel because of its non- conductive quality. Strongwell's rectangular tubes were lightweight, more durable, and quicker and easier to install than steel or wood.

"If the arms go bad, the customer could be without power for six or seven hours so you want to use something that you know you won't have any problems with," Stovall said.

The non-conductive feature of the fiberglass tubing also gave it a leg up over steel on this job.

"In the electrical industry we use a lot of fiberglass because it's a good insulator. If there is an alternative to steel we'd prefer to use it," he said.

Fiberglass had never been used before in this particular application. Stovall worked with Strongwell engineers to design a part to meet the requirement.

"We weren't sure at first if we could get tubing that was long enough, but it's worked out well," Stovall commented.

The tubes have been so successful that the Johnson City Power Board would like to make the fiberglass cross-arms a standard throughout its system.