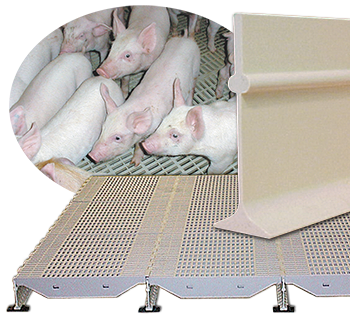 In the world of hog confinement, corrosion is a constant problem. Double L Group LTD., has found a solution to prevent decay by utilizing a custom fiberglass shape in its Stage 2 Floor.

Double L uses the PermaBeam, which is a pultruded FRP support beam designed and manufactured by Strongwell. The PermaBeam is attached to nursery/grower flooring to form Double L's Stage 2 Floor for hog confinement areas. The PermaBeam line of profiles comes in 3" and 5" heights to accommodate "new build" and renovation projects.

The PermaBeam is the result of Double L Group's research for a new design and better material for support beams. The company needed a support beam that could withstand the highly corrosive environment of a hog confinement building while also carrying the load of a nursery application.

Wood, steel and aluminum were the other materials considered in the design of a new support beam. However, none of those materials offered the strength or corrosion resistance that Double L needed in its flooring systems.

"We contacted Strongwell's engineers about a fiberglass beam," said Norb Borcherding, president of Double L. "We went with fiberglass because it was corrosion resistant, easier to clean and it doesn't harbor bacteria."

Double L Group provided Strongwell the framework for the design and load requirements for which the beam would be subjected. Strongwell then maximized the profile size, shape and composition to meet those requirements.

"Based on Double L's load criteria, we have taken the Double L profile design and optimized its engineered properties to maximize its strength in this application" said Strongwell Structural Engineer, Richard Cole.