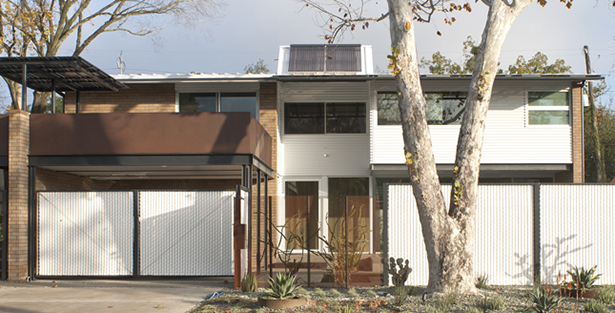 In 2010, Karen Lantz, AIA, of Enter Architecture decided to build and design her home in Houston, Texas with a goal to use “Made in America” products. Her “Lantz Full Circle Design Concept” has received multiple accolades as a prominent architecture design/build practice in the Houston, Texas area.

The economic climate at the time combined with her life experiences watching her father fall victim to market globalization in the American steel industry inspired the idea to build her home and show support for American manufacturing. Karen admits the task of finding and using only “Made in America” materials was easy in some ways and difficult in others. Throughout her quest, she learned “Made in America” does not always mean the same thing as she expected – at times only referring to companies that maintain a U.S. office or perform final assembly in the U.S.

One of her American-made discoveries came when she was looking for T-bar pultruded grating for some of her custom stairwells and walkways. After learning that the local manufacturer she initially selected began outsourcing production to Mexico, she searched for another supplier. In concert with Vince Pena of Diamond Services, Strongwell designed and created a slightly-modified version of its commercial T-bar grating for her custom residential needs. The final product met her design specifications while maintaining her conviction to support American Manufacturing jobs.

When asked of the home’s value she responded with, “I built it to be here 100+ years and lead by example for architects, builders, and owners who want American manufactured goods. It can be done with quality and beauty within budget.”