Anne Mullane is a Noteworthy Nominee 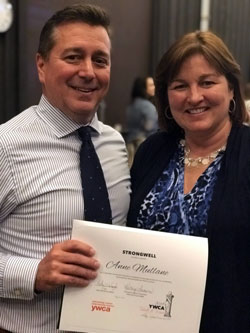 For the past 75 years, the YWCA of Northeast Tennessee and Southwest Virginia has been promoting peace, justice, freedom, and dignity for all. It proudly operates out of Bristol, TN as the only YW between Lynchburg, VA, and Knoxville, TN.

Each year, the organization hosts an annual “Tribute to Women” event at the historically recognized Bristol Train Station. This fully-attended event engages and recognizes nine influential women leaders who have served in positions to nurture, empower, and transform their communities.

Strongwell was once again listed as the “Protector of Peace” patron this year. Strongwell would like to congratulate its employee nominee, Anne Mullane (Materials Analyst-Bristol) for her commitment and dedication in the purchasing and procurement department. Anne joined the Strongwell team in 2016 as the Virginia Operations Administrative Assistant and was later promoted to Materials Analyst/Buyer.

Many thanks to the YWCA of Northeast Tennessee and Southwest Virginia for its continued efforts of community service.