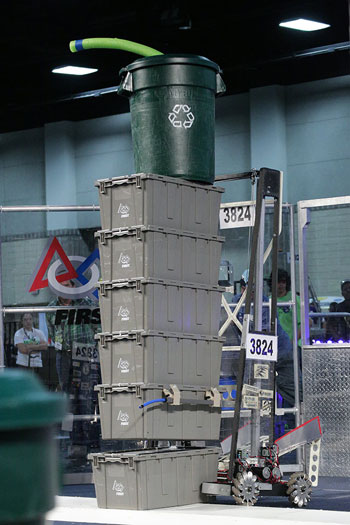 In April 2015, 60 high school F.I.R.S.T (For Inspiration and Recognition in Society and Technology) robotics competition students, along with staff members of Hardin Valley Academy, placed runner-up in the Tesla Subdivision of the FIRST® Robotics Competition (FRC®) World Championships in St. Louis. This team advanced to this level by placing first in their regional competition in February. This team collaborated five nights a week and on weekends with mentors from Oak Ridge National Laboratory (ORNL) to perfect their creation with regards to the timed task of stacking boxes.
One of the co-captains of the RoboHAWKtics team, Sierra Palmer, joined the team as a freshman and over the years her passion in STEM fields grew. The dynamics of the team also changed within those years as females now make up almost half of the team.
The RoboHAWKtics team took a risk this year to become the first team to use a fully 3-D printed robot in the competition along with Strongwell pultruded robotic lift arms. Their robot was named “BAAMbot” because it was printed at ORNL’s Manufacturing Demonstration Facility on the Big Area Additive Manufacturing Printer.
The team’s risks of utilizing 3D print technology and composites, and breaking traditional molds through STEM, generated huge rewards with regards to conversations about light weight, high strength building materials, the role of STEM in schools and gender equality.