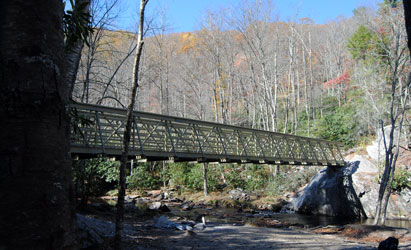 Deep in the Appalachian Mountains resides the Mountains to the Sea Trail. Its unique name is derived from the fact that the trail passes through 37 counties while extending from the tallest mountain peak in the Appalachian Mountains to the highest sand dune in the eastern United States.  The trail is well known to hikers as North Carolina’s longest marked footpath and as the state trail. Within the trail lies a junction called Boone Fork Bridge. Previously the junction near Blowing Rock was impassable and dangerous during certain seasons. In an effort to encourage discovery and appreciation for nature, the Friends of the North Carolina Mountains to Sea Trail secured monies to build a pedestrian bridge to guarantee safe passage to all hikers for decades to come. 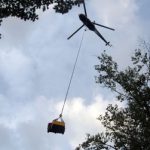 The nonprofit organization, Friends of the North Carolina Mountains to Sea Trail, report that 700 volunteers invest more than 30,000 man hours annually to build and maintain the trail. As this project is located remotely about a mile into a national forest, wood and metallic structures both would have been illogical building material choices. Instead, a more durable structural alternative had to be explored in this application as a long term, accessible solution for novice and professional hikers alike.

The design implemented was a four foot wide by eighty feet in length pedestrian bridge constructed with 8” channels and 2” x 2” tubes as structural members. An EXTREN® 500 series resin was utilized due to its UV inhibitors, resistance to rot and corrosion. 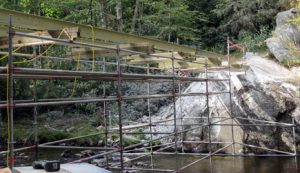 Being in an isolated location, the trail lacked vehicular road access. Welding and any sort of large scale fabrication would have been challenging to more traditional materials such as wood or metallics. Since lightweight FRP has a high strength to weigh ratio, a transport helicopter was used to lift piece-marked components from a dropship site to the junction in the mountains. Holes were also prefabricated so that installers could easily assemble the structure on-site. As a pedestrian walking surface was also needed, SAFDECK® FRP decking was coated with a high quality epoxy grit applied by Strongwell’s fabrication team prior to delivery.

The installation was completed as scheduled in September 2016 and has been happily received by the Friends of the North Carolina Mountains to Sea Trail organization and hikers just in time for the autumn visitors.