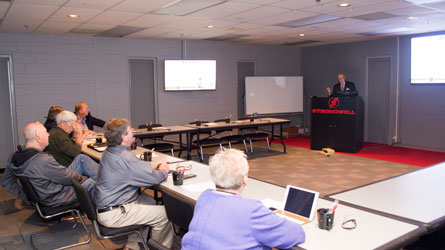 Strongwell was recently visited by the board members of SWVTC (Southwest Virginia Technology Council) to better understand the composites blueprint of Southwest Virginia. Since 1999, the council has been on a mission to lead Southwest Virginians in addressing technology issues for business, education and government with the purpose of enhancing the vitality and social well-being of Southwest Virginia. Representatives of the group were from areas such as Tazewell, Norton, Pennington Gap, Wise, and Big Stone Gap. As this was their first trip to Strongwell, the board members were educated by David Ring (Government Affairs & Strategic Projects Manager) and Tekai Shu (Social Media and Business Development Manager) about pultrusion technologies and the importance of composites in both current and future applications. SWVTC previously awarded Strongwell with the “Manufacturer of the Year” award due to its advanced manufacturing initiatives, technologies of scale and strategic partnerships. During the tour, Board members were excited to learn about the rich history, vast facilities, technological achievements and skillsets of Strongwell’s employees firsthand.