ASTRON, the Netherlands’s Institute for Radio Astronomy, is attempting to develop the world’s largest radio telescope by 2020. The Institute’s Electronic Multi-Beam Radio Astronomy ConcEpt (EMBRACE) design is one step towards this goal. In 2009, ASTRON awarded a contract to NIJL Composites, a distributor and fabricator of Strongwell products located in the Netherlands, to build the EMBRACE antennae’s support structure.

NIJL had two primary conditions to contend with when building the supports. First, the structure could not interfere with the antennae’s radio waves. Second, the structure had to be light in weight because the Westerbork construction site was difficult to reach. 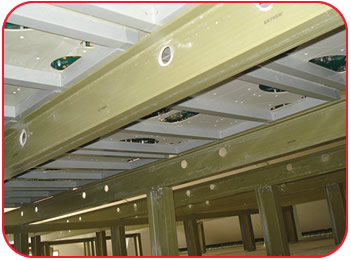 NIJL chose EXTREN® structural shapes to complete the task. EXTREN® is transparent to radio waves, microwaves and other electromagnetic frequencies. EXTREN® is also strong, but very lightweight, weighing 80% less than steel, in equal volume, and 30% less than aluminum.

NIJL successfully managed to supply and install the structure within 2 days using only wrenches. After installation ASTRON was still able to adjust the position of the lightweight structure in order to align the very sensitive antennae. Because of the project’s success, NIJL reports a follow up order was placed for a similar structure in France.