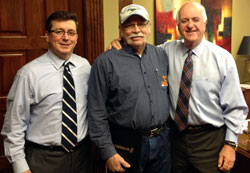 Freddy Whitaker (Shipping/Handling-Bristol) was honored with friends on March 3rd, 2014, in celebration of his retirement after 34 years with the company. Freddy joined Strongwell as a Hand Layup trainee after serving in the military. Throughout his tenure, Freddy held multiple positions with painting, fabrication, material handling and eventually was promoted to the Shipping/Handling Department where he remained for 12 years. When asked what he will be doing during retirement. Freddy replied he’d be busy spending time with his church, fishing, doing home renovations, golfing and continuing to be a great grandfather. He also looks forward to spending more time in the recording studio with his acoustic gospel group. Congratulations, Freddy!