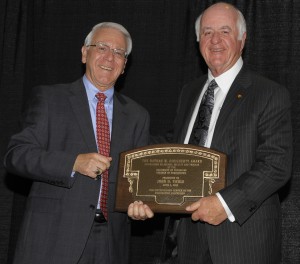 On April 4th, John D. Tickle, Chairman of Strongwell, was awarded the Nathan W. Dougherty Award. John graduated from the University of Tennessee in 1965 with a B.S. in Industrial Engineering.

He humbly accepted the award and stated his successes were deeply rooted in his understanding of a strong work ethic combined with following the “Golden Rule” for both professional and personal relationships. He stated that his work is far from over as education and technology are appreciative assets which engineers and students must embrace to tackle the mounting domestic challenges we face.

During his years of attendance at the University of Tennessee, John recalls Nathan W. Dougherty’s presence as a well-respected and influential man due to his engineering talents, ethics and professionalism.

Since its inception in 1957, the Nathan W. Dougherty Award has been annually presented by the University of Tennessee’s College of Engineering to an individual who has brought honor and distinction to the college through his/her achievements while striving to make contributions to the profession through civic engagement.  Recipients have been pioneering engineers, inventors, managers, researchers, professors and stalwart leaders within their respective industries.

The long list of recipients continues to extend the outstanding pedigree of individuals while creating new meaningful relationships which continue to reflect the accomplishments of Nathan W. Dougherty as an engineer, athlete and educator.