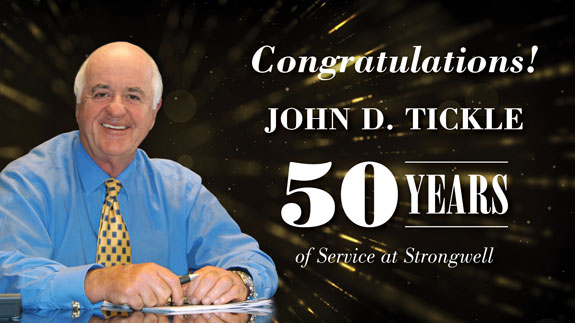 BRISTOL, VA — Strongwell (USA) announces John Tickle, Strongwell’s Chairman of the Board, celebrates 50 years with the company. The positive impact of his leadership at Strongwell, and his involvement in the composites industry, the community, and the many organizations he has supported over the years, cannot be overstated. David Oakley, Strongwell’s president and CEO said, “John is an icon in the composites industry. He is great leader, mentor, and most importantly, friend. All of his teammates at Strongwell are excited to celebrate his 50 year anniversary with him.”

John began his career at Owens Corning Technical Center in Granville, Ohio, just after graduating from the University of Tennessee, Knoxville, with a Bachelor of Science in Industrial Engineering. After stints as general manager of Justin Enterprises in Cincinnati, Ohio, and plant manager of Krueger Metal Products in Green Bay, Wisconsin, Tickle was tapped by Robert S. Morrison in 1972 to serve as president and general manager of Strongwell (then Morrison Molded Fiber Glass Company, MMFG). At Tickle’s direction, the company focused its efforts on the pultrusion manufacturing process and developed numerous new technologies and product lines.

The following decades were marked by impressive growth and profitable performance. Under Tickle’s leadership, Strongwell earned the reputation as the recognized world leader in pultrusion and pultruded fiber reinforced polymer (FRP) composites. In the early 1990s, the Tickle family and an outside investor purchased the company from its then owner, Shell Oil Company. In 2001, the Tickle family gained 100% ownership of the company. The company currently operates four plant locations: Bristol, Virginia; Abingdon, Virginia; Chatfield, Minnesota; and Apodaca, Mexico, with nearly 500 full-time employees.

Beyond his success at Strongwell, Tickle has been a vocal champion of the overall composites industry. He served four terms on the Board of the American Composites Manufacturers Association (ACMA) including serving as ACMA president, helped found the Pultrusion Industry Council (PIC) and served as its first chairman, and has served on dozens of other business and industry boards. His efforts were recognized by ACMA in 2012 when Tickle received the association’s Lifetime Achievement Award.

In his local and regional community, John has earned a reputation for his generosity and support of a variety of meaningful causes. He helped found the Wellmont Foundation and acted as its chair, chaired the Board for Bristol Regional Medical Center, and volunteered with the Bristol Chamber of Commerce, as well as local chapters of the American Red Cross, Boy’s Club, United Way, and YMCA, just to name a few.

John is also a major advocate for the Boy Scouts of America. Himself an Eagle Scout, Tickle has long served on the Boy Scout Sequoyah Council Board (including a term as president) and is a major contributor to the local Boy Scout Council and to the National Boy Scout organization. In 2006, the “Composites Merit Badge” was offered to all Boy Scouts with the generous help of ACMA and leaders within the composites industry, such as John, to broaden the materials science and engineering community. His advocacy for scouting has earned him a range of awards, including the Silver Buffalo Award, the Silver Beaver Award, the Distinguished Eagle Scout Award, and recognition at many scouting events locally, regionally, and nationally.

John co-chairs the University of Tennessee Fund Raising Campaign (Journey to Top 25) and serves on the University’s Advisory Board. In recognition of so many achievements in support of the University, Tickle was awarded the Jim & Natalie Haslam Presidential Medal in 2016, the highest award bestowed upon an alumnus by the UT system, and a crowning achievement that followed numerous other UT awards presented to John over the years.

Even at age 80, John remains actively involved at Strongwell and in many philanthropic and volunteer endeavors. John participates in daily business activities at the company in interactions with customers, suppliers, and employees. The passion and excitement John has for Strongwell is clear when he talks about where the company has been and where it is headed. Even today, John admits that he prefers his daily work schedule over retirement due to the amount of fun he is having every day.