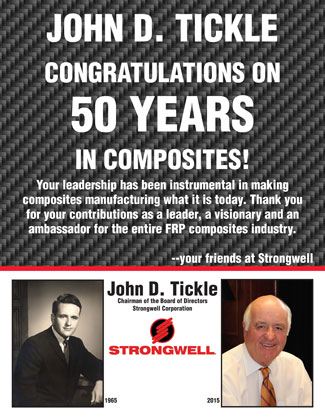 What makes for 50 years of excellence? As a well-known leader in the composites industry, John D. Tickle has never shied away from making tough decisions and empowering those around him. John is Chairman of the Board of Strongwell Corporation, headquartered in Bristol, Virginia. Strongwell has 647,000 square feet of manufacturing space in its three manufacturing locations. The company utilizes 62 pultrusion machines and employs more than 500 people. All of this makes Strongwell the world’s largest and most advanced pultruder of composite structural components.

John Tickle’s path to success began when he attended East Tennessee State University and transferred to the University of Tennessee, Knoxville, where he graduated with a degree in Industrial Engineering in 1965. After graduation, he became an engineer with Owens Corning, then general manager of Justin Enterprises in Cincinnati, Ohio and a plant manager with Krueger Metal Products in Green Bay, Wisconsin. In 1972, he was offered the position of President of Morrison Molded Fiber Glass Company (MMFG, now Strongwell) in Bristol, Virginia – Tickle’s hometown. Thus began his career in pultrusion.

Tickle refocused MMFG’s resources and changed its management structure. He also repositioned the primary manufacturing process for MMFG to pultrusion. The company has been profitable every year since. In 1993, Tickle, with the help of one outside investor, was able to purchase the company from Shell Polymer Ventures which had owned the company since 1985. By 2000, Tickle and members of his family had acquired all shares from the outside investor, transforming Strongwell into a debt-free, family-owned corporation.

When Tickle took the helm at MMFG in 1972, its sales were approximately one million dollars annually. Under his leadership and influence, the company has grown to the world leader in pultrusion it is today. Tickle’s strategy to grow Strongwell included the expansion of its facilities, continuous refurbishment and improvement to its equipment and processes, and major investments in research and development. Simply put, John Tickle is an ambassador for the process of pultrusion and has proven its value in the composites marketplace.

John is also very focused on his community. His support and the service to his hometown are not matched by many. One of his most memorable philanthropic accomplishments includes being past president and board member of the Sequoyah Council of the Boy Scouts of America; Tickle was himself an Eagle Scout. He has served on several boards, including the Bristol Life Saving Crew, Bristol Chamber of Commerce, Country Club of Bristol, Boys & Girls Clubs of Bristol, Red Cross of the Mountain Empire, Bristol Regional Medical Center and its Foundation, ETSU foundation, and ETSU’s Roan Scholars Program Chairman.

As a huge supporter of education, Tickle recently dedicated the John D. Tickle Engineering Building on the campus of the University of Tennessee, Knoxville. This five-story, 110,000 square-foot, $23.1 million structure now houses the Department of Civil and Environmental Engineering, as well as the Department of Industrial and Systems Engineering. John is a strong believer in education, and has been a long-time advocate of composite programs in higher education.

Throughout the decades, John Tickle has received multiple awards including the “Outstanding Philanthropist” presented by the Mountain Empire Chapter of the National Society of Fundraising Executives. That award was followed by the “Outstanding Fundraiser” award. The Tri-Cities Executive of the Year, United Way’s outstanding Volunteer, Pultrusion Industry Council’s Award of Excellence, University of Tennessee’s College of Engineering’s Nathan Dougherty Award, ACMA (American Composites Manufacturers Association) Lifetime Achievement Award and the Torchbearer for Western Virginia award presented by the Virginia Chamber of Commerce/Virginia Business Magazine.

Today, although John leaves the day-to-day management of Strongwell to a trusted set of leaders, he remains involved in key strategic decisions, as well as providing mentorship and guidance, and other duties related to his chairmanship of the company.

Strongwell’s American made products are continuously used in multiple markets and excel in environmentally challenging applications such as offshore drilling platforms, copper mining facilities, and field-erected cooling towers. For the past 50 years, John Tickle’s successes have been driven by his continued visionary commitment to innovation, quality, growth and his community. John’s goal has always been to make composites an important segment of the construction materials industry. Tickle’s efforts have directly impacted how composites are used today and his efforts bear out that composites are a viable alternative to traditional materials in a variety of settings.