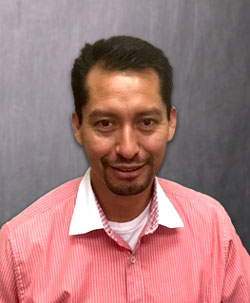 We are pleased to announce that Jorge Martinez Gavia has joined Strongwell as the Engineering / Quality Coordinator for STRONGWELL S. de R.L. de C.V.  Jorge will report to Antonio Garza and will coordinate all the production processes and quality assurance for the Mexico facility.

A native of Monterrey, NL; Jorge received his Bachelors of Mechanical and Metallurgical from UANL Universidad Autonoma de Nuevo Leon in San Nicolas de los Garza in 1998, his specialization in Tribology from UANL in 2000, and is currently finishing his Master’s in Business Administration.  Jorge was most previously employed as Head of Pultrusion at Stabilit in Nuevo Leon, and is very familiar with the pultrusion process.

Jorge is married and resides in Escobedo with his wife Elizabeth and his children Jorge, Jr. and Monserrat.

Please offer your full support and join us in welcoming Jorge to Strongwell.