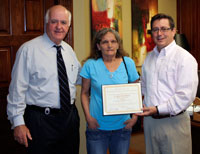 Lora Looney (Pultrusion Operator-Bristol) was recognized on June 20th, 2013 in honor of her retirement from Strongwell. Lora was with Strongwell for almost six years.  She began her career in fabrication and eventually moved into pultrusion, where she became an experienced pultrusion operator. She currently resides in Abingdon, Virginia and looks forward to spending more time with her family. 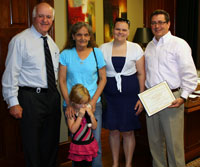 Strongwell congratulates and thanks Lora for her hard work and dedication over the years.