Preserving a Lighthouse with Composites 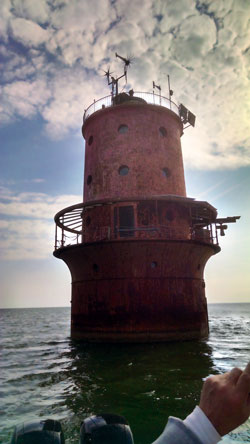 Quietly guarding the commercial waterways of Hampton Roads, Virginia are two sandbars named Willoughby’s Spit and Horseshoe Bar. On Horseshoe’s Bar sits Thimble Shoals, a screw pile lighthouse. In 1872, the reinforced screw pile lighthouse was introduced to the area to withstand the ice and conditions of this heavily-used commercial channel. Eight years later, the lighthouse was destroyed by fire. Another lighthouse was brought in three months later and within a few years it was rammed by steamers, barges, and schooners. The schooner accident knocked over a wood stove resulting in the structure burning into the water. In 1914, a new cassion design was erected in a nearby location as a replacement lighthouse.

Today, the three story structure rises 55 feet above the water and is only one of the two caisson lights on that Bay which possess their original gallery roof. Its lighting system was automated in 1964 and in 2005 the lighthouse was purchased by a private citizen through the National Historic Lighthouse Preservation Act. Today, the Coast Guard still utilizes the lamp as an active navigation aid. 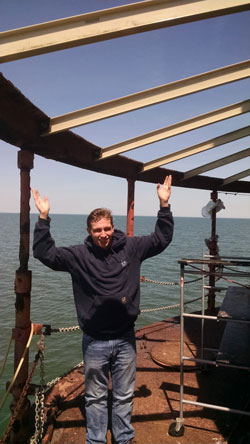 Peter Jurewicz has been maintaining the lighthouse since the 2005 purchase. He has been slowly refurbishing the lighthouse which can only be reached via boat since it is roughly 3½ miles from shore. Over the years, corrosion has accelerated the degradation of specific portions of the lighthouse through ultraviolet exposure, coastal winds and salt water. Thirty-three metallic canopy and gutter supports had corroded beyond repair. EXTREN® FRP beams were utilized to replace the rusted metallic struts, canopy and gutter supports. Prior to install, the fabrication and installation team had little exposure to pultruded composite fiberglass. Despite this lack of experience, the team chose fiberglass due to its corrosion resistance, durability, high strength-to-weight ratio, ease of handling, and the installation challenges steel would present at their remote location.

The team has been extremely pleased with the performance, ease of installation and attributes of Strongwell’s EXTREN® material.

Click here to read the case study in its entirety.