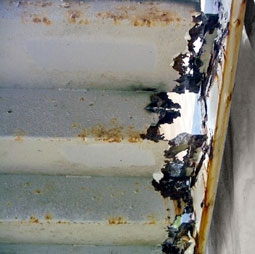 The Isle of Palms is a small barrier island located 20 miles from Charleston, SC. Within the island resides a small oceanfront lodge with prime beach access.

The lodge’s main lobby area is located on the first floor, which is 12 ft. above ground level. For years, the access stairs to the lobby were concrete and metal, which continually rusted. Eventually, the stairs deteriorated beyond repair. The management company reported that it spent over $2,500 annually to have the stairs sandblasted, rust treated, and then repainted. The overall annual process would create inaccessibility of almost two weeks with no significant improvement to aesthetics. Rust began to quickly reappear within sixty days of treatment.

To further complicate accessibility, the front stair case measured 4’6” wide and shared the same corrosion cycle as the 8’ wide access stairs to the service elevators adjacent to the front of the facility.

The costs associated with the corrosion cycle began to worry the lodge’s HOA board. The intuitive board began to look at ownership costs over a 15 year period. They calculated that almost $20,000 of maintenance expenses ($12,100 for 11 years of painting and $7,500 for three years of sand blasting treatment/repaint) had been accrued to the stairs.

Under the advisement of a structural engineer and several general contractors, the board was presented with three viable options for replacement and durability. 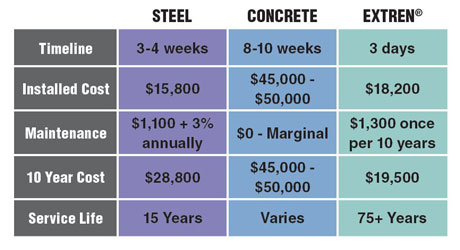 Option 1
Replace with original design for $15,800. This upfront cost did not including annual maintenance and inflation costs. Cumulatively, the costs for ten years would approach almost $30,000, with a restoration time of about a month. The average life expectancy of this approach would be around fifteen years.

Option 2
Replace the current system with a poured-in-place cast concrete stair system.
The project estimates ranged from $45,000-50,000. This option would require the removal of the current overhead awning and a rebuild of the ground level architectural arch. The maintenance costs would be minimal in the first ten years, however the time frame for restoration would surpass two months.

Option 3
Completely demolish the old stair system and replace it with 4Ever Stairs, an architectural fiberglass stair system outfitted with EXTREN® structural fiberglass members. The 525 series was chosen due to its ability to meet current fire and building codes. Total ten year associated costs for this approach was $19,500 dollars, of which $18,200 was dedicated for demolition, installation, and materials within a work week. The remaining $1,300 would later be used for painting in about a decade.

As the HOA examined option 3, they realized that preserving aesthetics was key to the facility. They were surprised by FRP’s ability to provide 75 years or more of life expectancy. This option also provided the lowest 10-year overall ownership costs compared to concrete and steel (32% less) and cast-in-place concrete (57% less). Additionally, the location of the inn is adjacent to a busy two-lane street which is the only access point for deliveries and tourists.

As the stairs remain one of two access points for check-ins, option 3 also provided a significant reduction in downtime compared to concrete and steel (88%) and poured concrete (98 %) without the need for special permits or traffic rerouting.

Day 1: Complete removal of rusting steel stair system
Day 2: Install 4EverStairs, an architectural fiberglass stair system that is built with EXTREN® structural fiberglass members. Within the day, the existing aluminum handrail from the old stairs system was reattached to the system and building.
Day 3: The building inspector released the stairs for public use.

After eleven years of continuous use, engineers and guests still have to be persuaded that the steps were pultruded. To further eliminate the corrosion cycle of stairs, the HOA voted and agreed to replace the elevator access stairs which measures 8’0” in width within the first two years of initial install.

Click here to view the case study in its entirety.