In 2009, 120 homes near the Oxnard/Ventura area of California were fitted with STRONGRAIL®, Strongwell’s architectural handrail and fencing system. The homes originally used wrought iron for balcony and pool perimeter fencing, which all succumbed to the salt air and water, causing pitting, oxidation and discoloration.  The Board of Directors at the Channel Islands Homeowners Association requested an easy-to-maintain, long-term solution for their large property.  They also pointed out the challenge of installing railing on several 4th floor balconies. In addition to meeting these requirements, STRONGRAIL® also provided the value-added benefits of engineered wind-load strength, durability of finish, and an incorporated architectural design attractive to homeowners, designers and contractors.

Saddleback Fence and Vinyl Products outfitted the 120 homes with 42” balcony rails and installed 72” perimeter fencing around the property overlooking the marina area. Minimalistic square pickets and handrails were used to reduce the aesthetic disturbance for those gazing at the majestic view of the Channel Islands National Park. 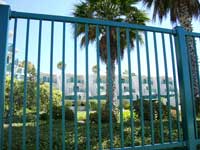 When asked of STRONGRAIL®’s performance four years after the original installation, Sarah Taylor, Manager at Gold Coast Association Management, said they would like to add more STRONGRAIL® to their other properties as it is a long-term, cost-effective current and future solution for coastal properties.

STRONGRAIL® handrail and fencing is cost competitive with traditional railing materials while generally offering a much longer lifespan. PVC offers no comparable strength or durability to fiberglass and degrades rapidly in coastal environments. Wood splinters, stains, and warps, and requires constant repainting. Aluminum and steel oxidize, discolor and rust in coastal applications, increasing maintenance costs and risking safety.  In a coastal environment, FRP architectural handrail and fencing is the clear material of choice.