Strongwell Believes in Being Difference Makers 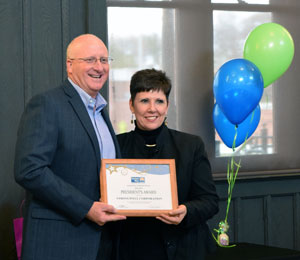 For decades, the United Way of Bristol has delivered well-deserved recognition for organizations that have gone above the standard of giving as contributors. This year’s Top Giver Award was presented to Strongwell, as it raised over $116,000 towards this year’s campaign, themed “Be a Difference Maker.”  The President’s Award was also presented to Strongwell for achieving 90-100 percent of its Fair Share potential. Each year, Strongwell’s internal campaign team coordinates community speakers for multiple employee meetings in order to educate and advocate for community involvement.
Strongwell would also like to congratulate other businesses this year for their contributions. The Campaign Chairman’s Award went to The Robinette Company & also to King University for their substantial year-over-year increase in employee contributions.  The President’s Campaign Award was awarded to Bristol Regional Medical Center for its donations and volunteerism throughout the community.