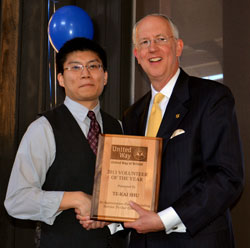 On March 7, Tekai Shu (Social Media and Print Specialist) was awarded one of the highest honors from the United Way of Bristol Tennessee/Virginia – Volunteer of the Year. During the 2013-2014 season, Tekai acted in numerous roles: photographer, researcher, communications team member, social media guru and many others. As David Ring, outgoing United Way of Bristol president (as well as Manager, Governmental Affairs & Strategic Projects for Strongwell) stated while introducing the award, “once Tekai commits to something, he hits the ground running and you better get out of his way.”
Tekai is an active force in the United Way of Bristol’s efforts, helping to build a social media strategy for the agency and develop creative ways to engage the hard-to-reach Generation Y demographic. The ultimate goal is to encourage everyone to become supporters of the United Way’s cause, which in Bristol translates to funding 50 programs at 27 non-profit agencies throughout the region.
As an employee of Strongwell since 2007, Tekai runs the day-to-day activities of the company’s media center, as well as generating content for social media and the company blog. He also is regularly involved in projects to market Strongwell’s products in new and creative ways, a skill he has become well known for within the organization. This recent award from United Way bears out that Tekai’s skill for creative and “out of the box thinking” is a valuable asset, and his recognition is well deserved. Way to go, Tekai!