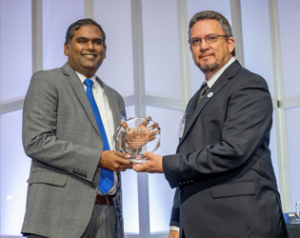 Since 2007, SVAM has been a manufacturing-led 501(c)(3), non-profit organization dedicated to the sustainment and advancement of manufacturing within Southwest Virginia.

As a result, its main objective is to unite regional manufactures to strengthen its role in economic development, redefine the image of manufacturing, and address the ongoing trade skills gap.

To celebrate its achievements, the organization hosts an annual gala each October, which is also National Manufacturer’s Month. Business leaders and community members are invited to see the progress of the organization as well as individual companies.

Each year, multiple awards are presented to companies for outstanding achievements. There was a total of seven awards presented at this year’s gala. 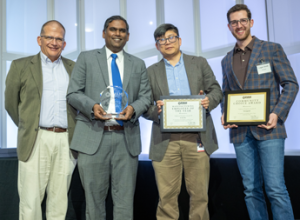 Strongwell was presented with the “Innovations in Manufacturing Award” for a pultruded carbon fiber component within one of JOST International’s fifth wheels. The component reduced the overall weight of the fifth wheel while yielding significant strength improvements over traditional steel and other alternative designs. This new fifth wheel is now the lightest fifth wheel rated for 55,000 lbs.

Strongwell’s Highlands facility was also recognized as an “Excellence in Safety Award” finalist for its continued commitment towards workplace safety. For over two years, it has maintained an accident-free workplace through its on-site safety initiatives.

Te-Kai Shu (Social Media and Business Development Manager-Corporate) was also a finalist for the organization’s Manufacturing Employee of the Year for his involvement in civic and manufacturing outreach roles.