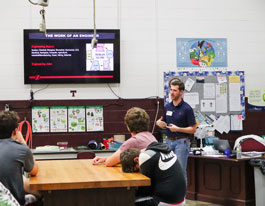 Strongwell employees Logan Smith (Process Engineer) and Te-Kai Shu (Social Media and Business Development Manager) were recently invited to a “Principles of Engineering” class at Tennessee High School in Bristol, TN. In total, twenty students were in attendance to discuss the breadth of engineering fields and the role of engineering within the manufacturing sector.

During the class session, Logan shared some of his favorite memories from Tennessee High School, his education at Tennessee Tech, and his daily role at Strongwell. Students were provided with a glimpse of his daily schedule, designs, and how raw materials and costs factor into the manufacturing process.
In addition to the presentation, students were divided into two teams to perform a hands-on assembly activity using Strongwell’s FRP composites. Two sets of assembled step stools were fabricated out of EXTREN® structural shapes and plates for students to disassemble and reassemble. 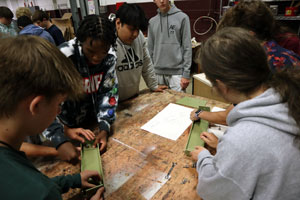 Once the assembly of both stepstools were completed, both teams guessed that the step stools would support less than 300 lbs. of total weight. At the end of the testing phase, the students were all shocked that each lightweight stool was capable of supporting over 900 lbs.

Strongwell would like to thank Ms. Givney of Tennessee High School for the opportunity to provide insight into career choices while exposing students to the composites sector.