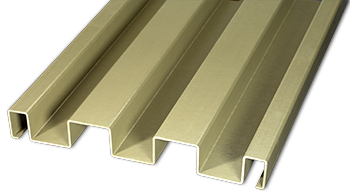 Keegan's Bayou Plant, a waste water treatment facility located on the outskirts of Houston, Texas, needed to update its facility. Houston's growth had caused the plant to expand its facility to accommodate the area's growing population. The city took over the plant as a result and found that the plant's existing chlorine contact chambers did not have a baffle system in place to aid in the even dispersion of chlorine throughout each chamber.

The city decided to install a new baffle system with cost and the use of a noncorrosive material as key concerns. Strongwell distributor, Glass-Steel of Woodlands, Texas, overcame the city's concerns by developing a new baffle system using Strongwell's baffle system and EXTREN® rectangular tubes and angles for the plant's two chlorine contact chambers.

Materials considered for the project included aluminum, stainless steel, poured in-place concrete and concrete columns with redwood baffles. However, an FRP system became the clear-cut choice because it was a less expensive alternative and more corrosion resistant.

"Chlorine is such a corrosive material," said Glass-Steel owner Pat Lindsay. "The system we designed using Strongwell's baffle, tubes and angles was much more economical than any other alternative materials."

The project began in the spring of 2002 and was completed that summer.

"We found it very easy to install," Lindsay said. "The workers were pleased with how fast they could install it and liked working with such a lightweight material."