Originally conceived over 30 years ago as steel and aluminum decorations, the fiberglass turrets of EXTREN® structural shapes and FIBREBOLT® fiberglass studs and nuts housed 20' high antennae for first responders’ communication. As an industry leader, Strongwell’s fiberglass structural products comprehensively gained L.A.R.R. approval. This certification allowed the developer to alter the metallic design to composites due to composites transparency to radio signals. 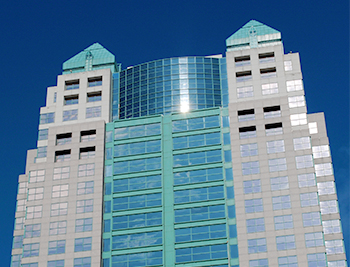 All-fiberglass structural members were prefabricated and shipped to the site. Structures were almost completely assembled on the ground and lifted to the rooftop via crane. Workers were then able to bolt the fiberglass base plates to steel base plates on the roof.

Since 1988, Florida has endured over 100 tropical depressions and hurricanes. The fiberglass turrets were designed by project architects, Owens, Skidmore & Merill to accommodate hurricane winds common in Florida.

“We spent all of this money to make the towers distinctive, then we would have had to put antennae on the corners and it would have ruined the design and view,” said Julio Maggi, Construction Manager for the $130 million building developed by Lincoln Property Company. The city required the antennae to be installed because the 441' height of the building would have interfered with critical radio signals.

Over the past three decades, the developer reports that they continue to utilize the internal space of the aesthetic superstructure to conceal signal amplifiers and perform little to no maintenance on the superstructures. Maintenance workers reported the only efforts they put forth are to check the tightness of bolts every few years or after significant weather events.