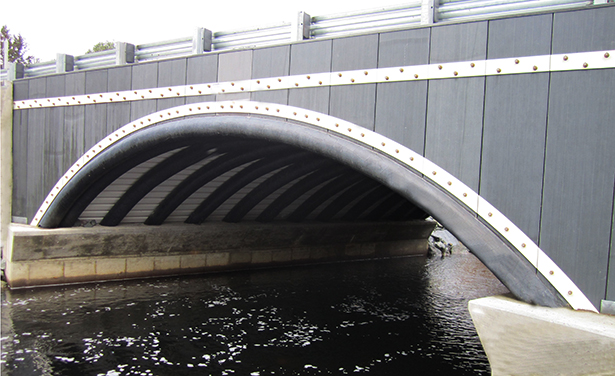 According to the Federal Highway Administration (FHWA), as of December 2013, there are over 29,000 structurally deficient and functionally obsolete bridges within the National Highway System and over 140,000 outside of the system.

Factors leading to a bridge’s deficiency are usually directly attributed to corrosion. Hybrid composite concrete bridge technology has offered a step-in solution to reduce upfront costs in material, fabrication time, transportation, construction time and maintenance issues from traditional bridges. Advanced Infrastructure Technologies (AIT) offers a 100-year lifespan system which utilizes FRP composite tubes to act as external reinforcements and a permanent formwork for cast-in-place structures to replace steel rebar, eliminating all exposure to rust and corrosion – an $8.3 billion direct cost problem for our nation’s infrastructure, according to a 2002 FHWA study.

The Sumani Trace Bridge in Trinidad was the first internationally constructed composite arch bridge. Designed by AIT and installed by Lincoln and Associates in Trinidad, the five arch bridge spans over 26', is over 24' wide, and has a 5' rise. Strongwell’s COMPOSOLITE® Building System acted as a corrosion resistant soil retention headwall system. The easy-to-fit system allowed the installers to slide the panels together to create headwalls in less than one working day. All of the bridge components fit into a standard ISO container with space to spare.

The AIT Composite Arch Bridge system is an excellent example of how composites can be used to replace steel in vehicular superstructures in corrosive fresh and saltwater environments without compromising aesthetic appeal or increasing maintenance requirements.