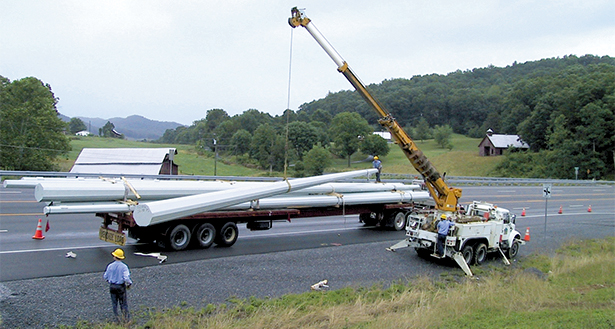 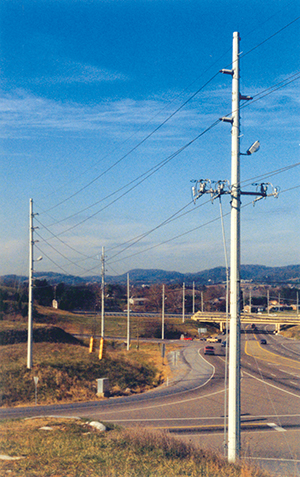 When the Bristol Tennessee Electric System (BTES) had a fast-track installation project for a transmission line along the newly constructed Highway 394 in Bristol, Tennessee, the utility looked to Strongwell's SE28 fiber reinforced polymer (FRP) utility pole as the solution for a quick and easy installation.

The utility had two months to install a new transmission line and lighting system along the highway before thousands of people would crowd the area to attend a major NASCAR race at Bristol Motor Speedway. BTES needed 35 poles that could be delivered and installed quickly. Strongwell was able to meet all of the utility's requirements with the SE28 pole.

Stongwell's pultrusion and fabrication capability meant that the company was able to deliver all 35 poles to the installation site within four weeks. The ability to load up to 16 of the lightweight poles on a truck further expedited the project. BTES crew members found that the SE28 poles also were easy to install. Unlike the concrete alternative originally considered for the project which would require a crane for installation, crews were able to maneuver and install the FRP poles using only a line truck.

"BTES was able to save time and money in shipping, handling and in line crew scheduling by choosing Strongwell's SE28 pole for the installation," said one BTES official. He commented that offloading an entire truckload of poles only took about an hour and the crew did not need any special equipment to install the poles.

As an added benefit, the SE28 poles performed double duty since the poles are capable of supporting transmission lines, distribution underbuild and lighting. This factor alone spared the utility the expense of installing separate lighting poles.

All of the SE28 poles, which range in height from 70' to 80', were customized for the particular application. BTES was so pleased with the installation and performance of the poles that it has since installed an additional 109 poles for this transmission line and 58 poles for another project.