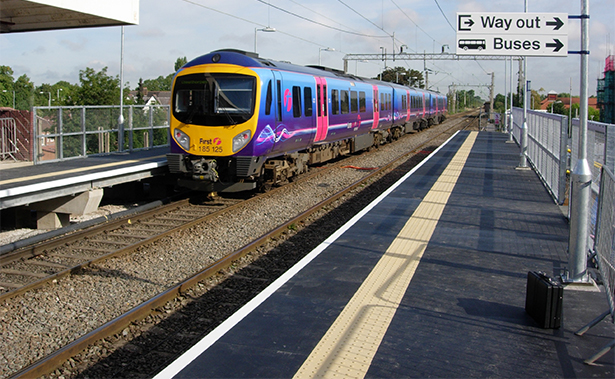 Strongwell’s SAFPLATE® bonded to DURAGRID® pultruded grating, along with EXTREN® angle, were chosen to replace the surface of approximately 367 feet of concrete platforms at the station. The SAFPLATE® provided a non-slip, gritted walkway while maintaining the aesthetic properties of the station. The “state-of-the-art” installation also provided a gritted “bright white” edge and a tactile strip to aid visually impaired commuters.

Supply, fabrication and installation of the platforms were all cost-effective and time-saving. The destruction of the old concrete platform and the installation of the new steel deck with FRP surface went much easier and quicker than expected. Work was completed and the station reopened in seven weeks — right on schedule! The successful and speedy installation reduced disruption for travelers.

The platforms have a life expectancy of 60 years and were designed as a modular system that can be added to in the future. PIPEX Managing Director, Simon Eves said , “The use of structural composites for this application marked a major milestone for Network Rail and PIPEX was proud to be chosen for the design, fabrication and installation of the new station deck.”

Network Rail’s regional General Manager, Jo Kay said, “It is a tribute to the hard work and dedication of all parties involved that the first phase of work was completed on time and on budget.” With such success, plans for similar renovations within the Manchester line are currently underway.