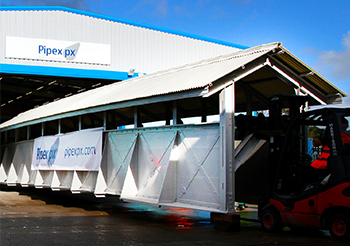 The composites world celebrated a historic milestone during the weekend of October 13, 2012, in Dawlish, United Kingdom. After seventy-five years of service the Grade II listed Dawlish footbridge in the coastal scenic county of Devon was replaced with the world’s first Grade II listed FRP Bridge. The original structure was built in 1937 and had deteriorated beyond repair due to salt spray-induced corrosion, combined with the region’s harsh marine environment. Replacing this bridge was a challenge due to it being one of the 500,000 man-made structures which are protected by the United Kingdom’s historic and architectural listing (tiered grading) system.

Alternative solutions were presented by Network Rail engineers in an attempt to refurbish the corroding girders, roof, protective paintwork and rotting timber decking, but replacement by Pipex px® FRP fabrication was concluded to be the ideal solution. The Dawlish footbridge was designed and engineered by Tony Gee and Partners and Optima Projects, with installation completed by Bam Nutall.

Pipex px® prefabricated portions of the bridge offsite to ensure fast installation and accurate testing performance while confirming the correct replication in design of the original 1930’s Grade II listed steel bridge. Strongwell’s EXTREN® plate was utilized for heat deflection and light fixture points, SAFPLATE® to cover flooring, COMPOSOLITE® as a main floor structure, showcasing
its state-of-the art toggle system, and kick plates as fascia panels on the side of the roof. Upon completion, the 60-foot bridge length weighed in at only one-third of its 15-ton steel counterpart, while being more than capable of withstanding a 13-ton load.

This is the first composite bridge at a mainline station in the UK, the second FRP footbridge to ever be installed on the Network Rails Western Route and the world’s first Grade II listed FRP bridge. It has been designed with a life expectancy of 120 years with virtually no maintenance requirements.