Fiber reinforced polymers (FRP) are among the most versatile building materials available. They combine high mechanical strengths with exceptional levels of flexibility to perform in an array of environments – supplanting conventional materials such as structural steels in certain applications. FRP products are now commonly found in everyday appliances and sectors, from tool handles to handrails.

Strongwell previously explored 5 common places you can find FRP products, but this article will explore 5 specific projects you would never have guessed used FRP to full effect: 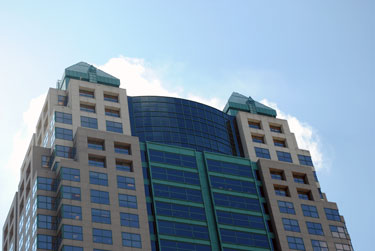 Since its construction in 1988, the SunTrust Center has remained the tallest building in Orlando at 441 ft tall. It is crowned with four green pyramidal turrets that form a distinctive and instantly recognizable part of the city’s skyline – and they are formed from FRP components.

Initially, these eye-catching spires were conceived as structures made from steel structural beams and aluminum screenings, but this represented a series of challenges for the designers – namely the application of the skyscraper’s cellular equipment:

“We spent all of this money to make the towers distinctive, then we would have had to put antennae on the corners and it would have ruined the design and view.”

With its excellent degrees of cellular transparency, the designers relied upon Strongwell’s pultruded FRP beams and flanges for the structural shape, with molded FRP panels coating the exterior. This shift in material application optimized the aesthetic impact of the building and improved the practicality of its interior commercial spaces.

The Silver Flow is a distinctive trade show design from Mercedes Benz, comprising a strikingly fluid design of horizontal ranging from 4 – 10 ft. These aesthetic spars are augmented with ambient lighting to convey a metallic ambience, but these components are designed using FRP.

This dynamic design was initially composed of aluminum spars, but the weight distribution was unattainable for some US tradeshow venues. The design team turned to Strongwell’s custom pultruded FRP to produce lightweight fiberglass lamellas with a metallic finish that were durable enough to withstand multiple usages during extensive tradeshow tours.

Observation towers in arctic environments are subject to exceptional weathering conditions that can cause wooden structures to rot and corrode. Yet environmental studies into arctic ecosystems are of increasing importance, so the associated infrastructure must be of the highest possible standard. Strongwell’s FRP products have been implemented for the formation of arctic observation towers, most notably at St. Paul’s Island for a Seal Observation Facilities Project. The new FRP tower exhibited vastly improved rot and corrosion resistances to withstand sub-zero temperatures and extreme weather conditions.

After the Wildlife Conservation Society’s New York Aquarium was hit by a super storm, repairs and improvements were necessitated to improve the facility’s setup. A pool previously used to house dolphins and pinnipeds was renovated using EXTREN® FRP structural shapes to create a brand-new arena for the housing of sea lions. These tailored platforms exhibit excellent resistances to constant contact with corrosive saltwater, and can withstand the weight of multiple adult sea lions.

The concept of beach construction and restoration is associated with the ultra-rich and the formation of exclusive islands in tropical environments – but there are more cost-effective methods for restoring coastal areas which have been subjected to weathering or coastal erosion.

The shoreline of Ohio’s Lake Erie was restored using a combination of FRP EXTREN® structural shapes and DURADEK® grating. This was implemented using a patented framing system designed for partial submersion into water to dissipate the force of waves and retain sand that is usually carried away from the beach. It encourages a gradual build-up of sediment from the natural flow of water, eventually acting as a barely-visible support structure for the shoreline.

Strongwell are leading manufacturers and suppliers of FRP products, having supplied a broad range of designers with unique FRP solutions capable of improving products in manifold ways.

If you would like any more information about our FRP products, please do not hesitate to contact us.