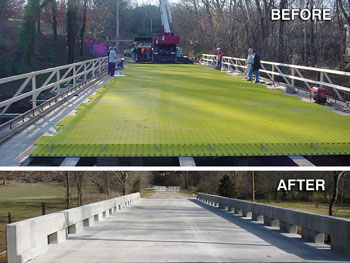 2005 Before and After Construction

Recent advancements within composites in infrastructure markets, including materials, standardized testing and overall market demands have reinvigorated the conversation as to how the nation will address future needs in the transportation and infrastructure markets and how composites can play a part. However, policies related to low bidding, material knowledge, testing, specifications, and sourcing concerns have prohibited the broad introduction of innovative solutions.

76,000 bridges were deemed “structurally deficient” over ten years ago. One of those particular bridges was the 73-year-old Greene County Bridge on Farm Road 148 in Missouri. The bridge was originally outfitted with steel reinforced decks which provided it initially with a 10 ton load capacity. Over time, exposure to chemicals and environmental factors reduced its load capacity to 4.3 tons. The Greene County Highway Department estimated it would take over two weeks to complete a bridge refurbishment of this size and importance. Instead, it was completed in 5 days with the assistance of the Center for Infrastructure Engineering Studies and Civil Engineering Department of the University of Missouri at Rolla. This bridge was also the first time the highway department, engineering design firm and construction contractors were exposed to a composite bridge application.

The project used Strongwell’s GRIDFORM™ system, which was designed to replace steel rebar in reinforced concrete bridge decks. GRIDFORM™ is comprised of a double layer of pultruded fiberglass grating bars separated by FRP shear connector with nylon bolts and FRP plate bonded to the bottom of the grating panels. 16 of these panels were used as a stay-in place concrete form. Expansion joints utilized a silicone joint system to eliminate the need for any type of steel in the bridge deck.

GRIDFORM™ solves many of the installation and life cycle headaches associated with steel reinforced bridge decks. The light weight, high strength system eliminates time- consuming and labor intensive steps such as setting forms and tying rebar. These savings allowed this bridge deck to be completed in a fraction of the normal construction time, a key factor as this bridge is a critical commercial thoroughfare. 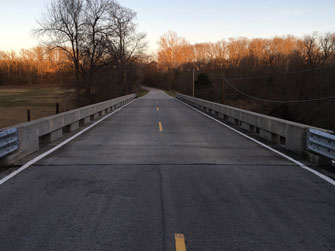 Installation of the GRIDFORM™ system is greatly facilitated by the lightweight nature of the panels. Large panels can be lifted with a single pick of the crane. This one advantage reduced the construction time for the bridge by more than 70%. Quicker panel installation led to a much faster rate of placement for the concrete as well, so additional time and labor savings were realized. Contractors estimate that with the reduced need for manpower and the speed of installation, deck construction labor costs were reduced by more than 75% when compared to steel reinforced decks of similar size.

Another primary advantage of GRIDFORM™ is its resistance to corrosion. Unlike steel rebar, FRP concrete reinforcements do not suffer corrosion like steel when exposed to deicing salts and other corrosive road chemicals. The noncorrosive FRP reduces the need for bridge maintenance and will greatly extend the life of the bridge deck.

Today, the number of structurally deficient bridges has been reduced to a bit over 58,000, proving progress has been made by DOTs and Highway Departments throughout the nation. However, with the continued use of traditional materials, construction costs and traveler delays remain high. Implementing broader use of systems such as GRIDFORM™, municipalities can save money and time while providing a longer-lasting end product. Since the Greene County Highway Department replaced the bridge on Farm Road 148 over ten years ago, there have been no issues with the performance of the bridge from abnormal cracking or deficiencies resulting from FRP components. 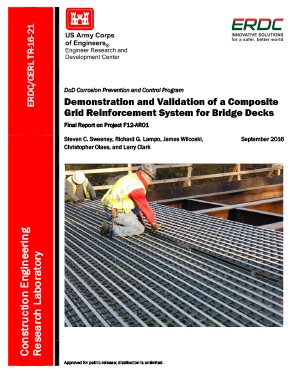 In September 2016, the U.S. Army Engineer Research and Development Center (ERDC) released its final report on Project F12-AR01, a project where two spans of an 82-foot bridge in Fort Knox, Kentucky, were replaced. On one span, Strongwell’s GRIDFORM™ Stay-in-place FRP Bridge Deck System was used; on the other span, traditional steel rebar reinforcements were used. Structural testing and corrosion monitoring of the bridge were then performed for comparative analysis.

Click here for the Final Report in its entirety.