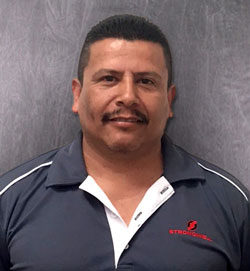 We are pleased to announce the promotion of Esteban Ortiz to Production Supervisor. Esteban will report to Antonio Garza, Plant Manager in the Mexico facility. Esteban began his Strongwell career in April, 2016 as Lead Operator. Prior to coming to Strongwell, Esteban gained valuable experience in the pultrusion process, this helped in the startup of the Mexico facility. Esteban and his wife, Rocio, have been married for 26 years. They have two sons, Brandon and Esteban, and a daughter, America.

In his free time, he enjoys playing football, actually Esteban is part of the Strongwell’s team “Deportivo Strongwell” and his favorite pro team is América.
Please join us in congratulating Esteban and offering him your support and cooperation in his new position.