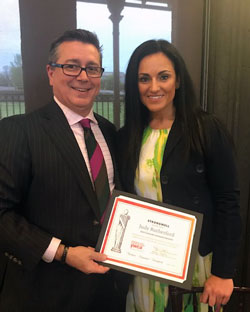 For almost 80 years, the YWCA of Northeast Tennessee and Southwest Virginia has been promoting peace, justice, freedom, and dignity for all. It proudly operates out of Bristol, Tennessee, as the only YWCA between Lynchburg, Virginia, and Knoxville, Tennessee.

Each year, the organization hosts an annual “Tribute to Women” event at the historically-recognized Bristol Train Station. This fully-attended event engages and recognizes nine influential women leaders who have served in positions to nurture, empower, and transform their communities.

This year, Strongwell chose Judy Rutherford as its 2019 YWCA Tribute to Women employee honoree.
Judy has been employed with Strongwell for the past 20 years. She began her career as a pultrusion operator at the Highlands Facility located in Abingdon, Virginia. Since then, she has gained multiple responsibilities within inventory management, production planning, and scheduling. In 2013, Judy was promoted to Master Scheduler for Virginia Operations. In this position, she was placed in charge of all production scheduling for pultrusion, molded grating, and fabrication operations within two facilities.

Strongwell was once again listed as the “Protector of Peace” patron this year and would like to extend its appreciation and thanks to the YWCA of Northeast Tennessee and Southwest Virginia for its community-based service mission.