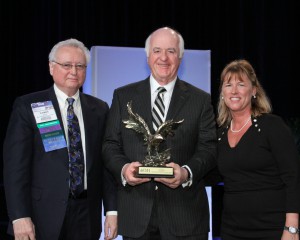 Strongwell is excited to announce that this year’s American Composites Manufacturers Association (ACMA) Lifetime Achievement Award was given to Strongwell’s Chairman, John Tickle. With over 20 years of composites industry experience, John has been a leader in substantial contributions to the world of composites.  He has served on the ACMA’s Government Affairs council, completed multiple terms as member of the ACMA board, and even acted as the association’s president.

His continued involvement in the composites industry has led to new market applications and unparalleled research and development for the FRP industry. John was quoted as saying of his experience, “what a wonderful industry to be in, with so much opportunity before us.”

John was also recently given the Heroism Award from the National Court of Honor of the Boys Scouts of America for being a strong supporter of the Composites Merit Badge. The initiative has introduced nearly 5,000 young men to the composites industry.