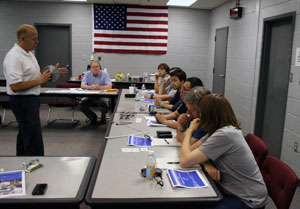 In July,  Strongwell’s International Business Group, IBG, welcomed a diverse group of international agents and distributors for a week of fabrication training at both Bristol and Chatfield locations. IBG recognizes the need for agents and distributors to learn how to safely and properly fabricate Strongwell products in order to sell the products to end customers. This year, participants were educated in FRP design/techniques and were given the opportunity to epoxy, grit, fabricate and assemble FRP structures.  Strongwell understands that providing on-going education and training for distributors is vital to the mutual successes of both Strongwell and those distributors. Value-added services such as this are only one of many reasons why Strongwell remains the world’s leading pultruder of FRP materials. 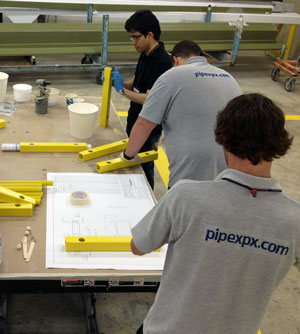 Group members came from CBSI-Japan, World Ocean-Korea, Skinest Rail-Polandand Pipex-United Kingdom. In addition to fabrication training the group was also treated to a tour of the Bristol Motor Speedway while enjoying local cuisine and attractions.
IBG would like to extend special thanks to Tom Carlson (Offshore Manager- IBG) - for hosting the event and the following Strongwell employees who were gracious enough to assist with this opportunity: