Strongwell Signs Statement of Support for our Troops 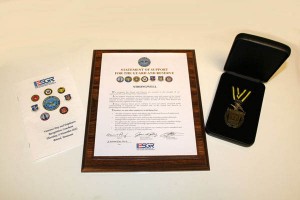 On November 8, 2012, Strongwell was recognized by the Employer Support of the Guard and Reserve (ESGR) for its support of our servicemen and women in the National Guard and Military Reserve.  Started in 1972, ESGR is a Department of Defense agency with the mission to develop and promote employer support for Guard and Reserve service members.  To be recognized by the ESGR, Strongwell signed the following formal Statement of Support:

Representatives from Strongwell were presented a plaque and employer medal by Major General Daniel E. Long, Jr., Adjutant General of the Virginia National Guard and Major General Terry M. Haston, Adjutant General of the Tennessee National Guard.  These pieces will be displayed in Strongwell’s corporate offices as a formal demonstration of Strongwell’s culture of support for our military forces.