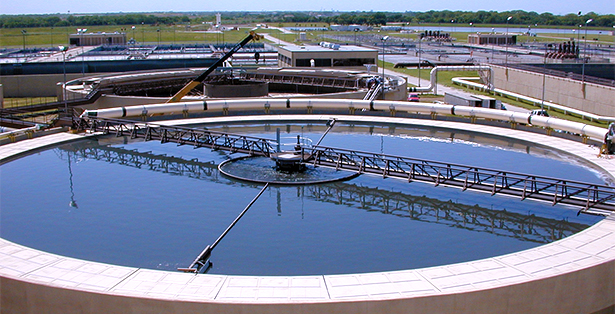 The Trinity River Authority (TRA) needed to cover up a big problem. The utility group needed to place odor control covers on several of its waste water treatment tanks in Grand Prairie, Texas, to help restrict gases released from its facility into the surrounding area. The growing population of Grand Prairie was coming into closer contact with the uncovered tanks, so a solution was needed to help contain the odor away from the public. 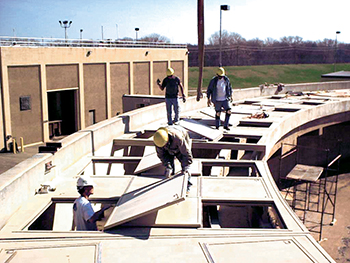 Strongwell distributor, Glass-Steel of Woodlands, Texas, had the answer to the problem using COMPOSOLITE®, EXTREN®, DURASHIELD® and several custom shapes to design odor control covers for three of the utility group's 165' diameter tanks. A system that would cover each tank entirely would have been too expensive, so Glass-Steel focused its design to cover only the area where the odor was being emitted.

"The TRA had originally specified a different make-up cover," said Glass-Steel owner Pat Lindsay. "But, they didn't like the design of the cover and the price was too high."

Aluminum, the original material specified for the job, would corrode, was more expensive and would often be too hot to touch and walk on. Lindsay was happy to offer the utility group a better alternative using Strongwell's composite materials.

The TRA chose Lindsay's composite design because it offered high corrosion resistance, low thermal conductivity and was less expensive than the aluminum system.

Each cover system measures more than 12' wide and 500' in length per tank and features 108 hinged doors made of Strongwell's DURASHIELD® foam core building panels.

"Using fiberglass allowed the workers to be able to walk on the cover without it getting too hot. The doors in the covers were also large enough so that a person could get into the trough for cleaning and maintenance," Lindsay said. "There is a big potential in this market for this application."